Does chicken noodle soup go bad? Yes, chicken noodle soup does go bad, and depending on the type of soup you have, it might last anywhere from five days to 2-5 years. Chicken noodle soup that comes in a can will last from 2-5 years if stored well and never dented or punctured. But chicken soup from a restaurant will last about two to three days. It goes bad quickly because it has no preservatives, and the noodles will begin to disintegrate. 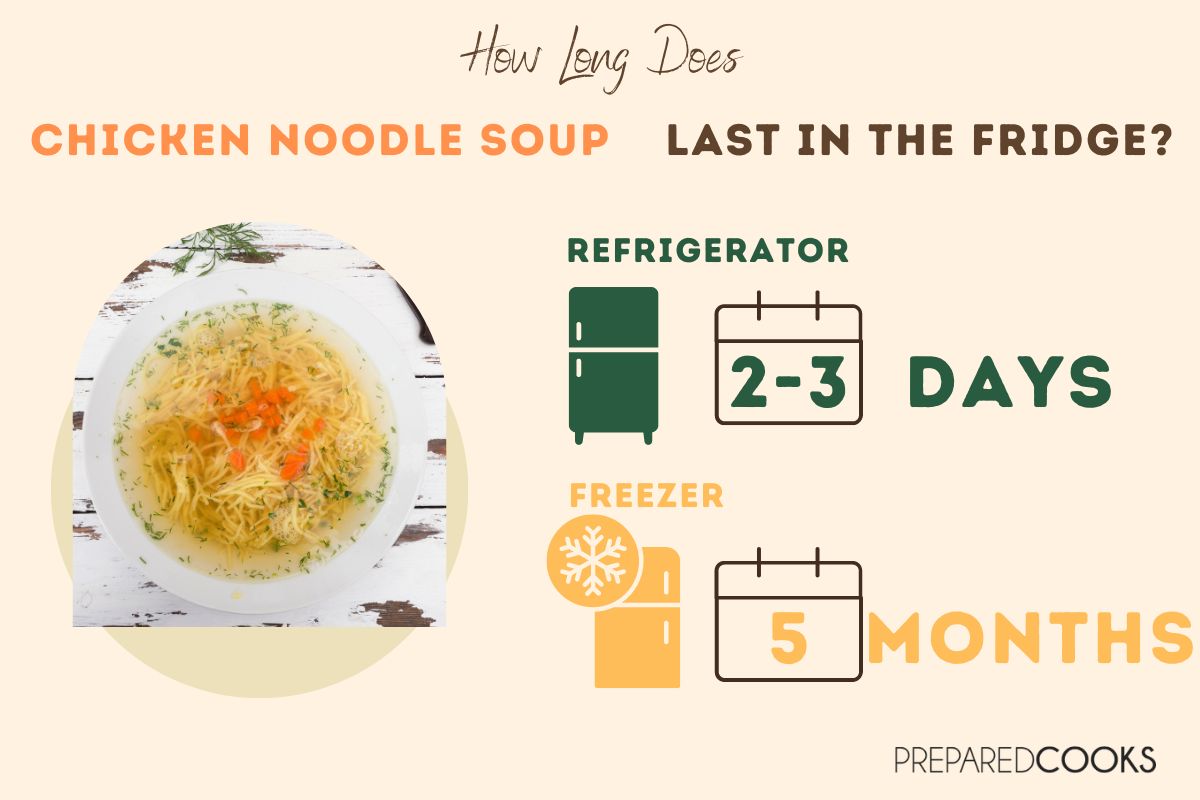 Canned: There are so many types of chicken noodle soups that come in a can, it is difficult to know how many brands offer this type of soup. Canned soups are usually safe to eat for two years before they begin to lose their flavor. But losing flavor does not mean that they are not edible after two years. If the can of chicken noodle soup is protected and sheltered, it can last up to five years.

Restaurant: Chicken noodle soups and most other soups made in restaurants don’t have any preservatives in them, so they don’t last as long as canned or grocery store soups. If you have chicken noodle soup from a restaurant and place it in the fridge, it will last about two days. After the first two days, the noodles will become bloated and fall apart.

Grocery store: Some grocery stores have sections in the store where they sell freshly made food. If a grocery store makes chicken soup, it will usually last one to two weeks, depending on how many preservatives are in the soup. Also, grocery store soup tends to have more salt than a restaurant or homemade soup, and the salt makes it last longer.

How to Know if Chicken Noodle Soup Has Gone Bad?

Smell: Because chicken noodle soup has chicken as part of its ingredients, and as chicken broth is part of the broth, it will have an old meat smell when it turns old. If you smell that the chicken soup you’re about to eat is off-putting or it has a stronger smell than it had when you bought it, don’t eat it.

Bloated noodles: This happens to grocery store soup, restaurant soup, and freshly-made soup more than it happens to can soup. If the chicken soup, or any soup with noodles, has bloated noodles, the soup has been sitting too long, and the noodles will disintegrate when you put them in your mouth.

Mold: Mold takes a while to form in soup, but it still can grow. It floats on the top of the soup’s surface. Mold usually develops after a week. The mold will look similar to bread mold as it will be green and have a white rim around its edges.

How to Store Chicken Noodle Soup

If you open up a can of chicken noodle soup and you cannot finish it, eat it within 24 hours. Chicken noodle soup that comes from a can should not sit in the refrigerator. So place it in a Tupperware container and lid for your next meal.

When you buy chicken noodle soup from a grocery store or a restaurant, all you need to leave is leave it in the container it came in. It has to be eaten soon, so there is no need to store it away.

As referred to above, you can freeze homemade chicken noodle soup in individual servings and store them in a freezer-safe container. It is best to do this right when the Noodle soup has cooled down from cooking.

When you fill-up the containers with the soup, do not fill it up to the top. Leave a little extra room because liquids become larger when they freeze. A container of soup that has been filled to the brim will burst in a few hours because there is no room for the solidifying soup to expand.