How Long Can a Honey Baked Ham Stay in the Fridge?

Knowing how to store meat properly and safely can be a challenge, but it’s crucial to take the time to get it right, because you don’t want to find that your ham has gone off before you have had a chance to enjoy it! These tend to be large pieces of meat, and you therefore want to maximize the shelf-life to reduce wastage. 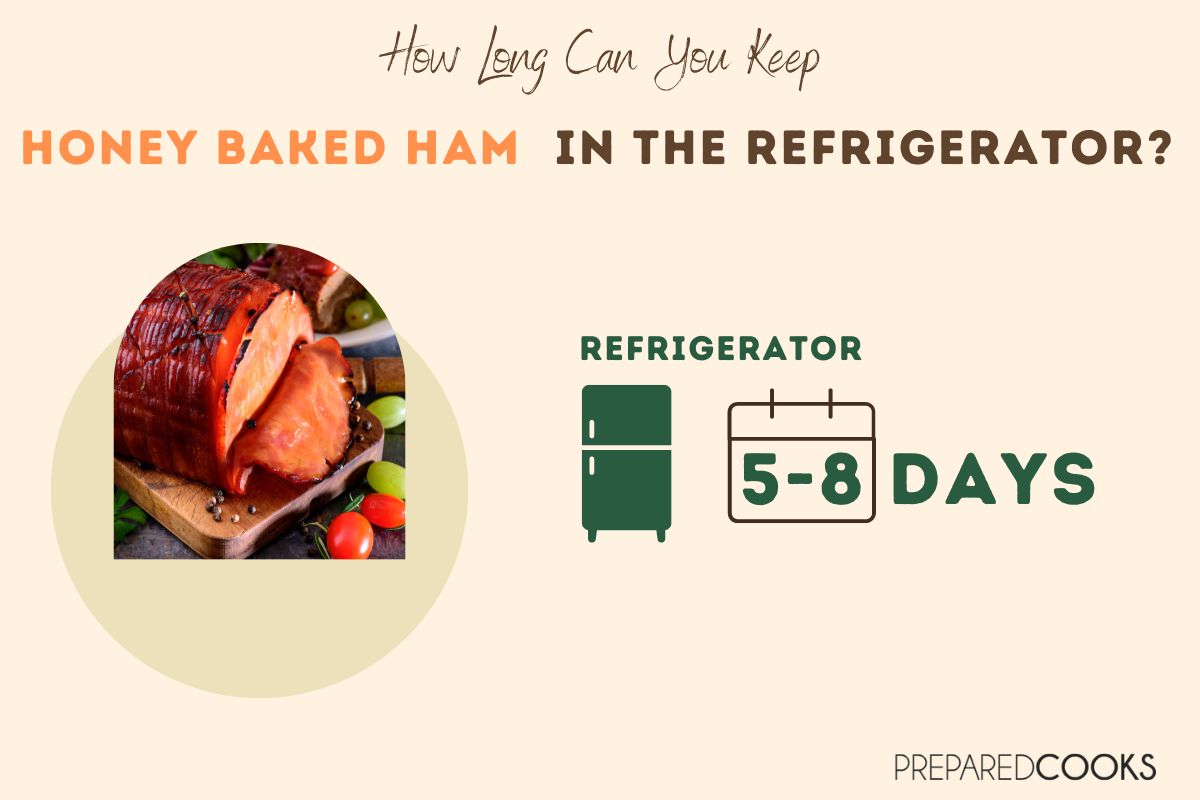 Will Baked Ham Last for Long in the Fridge?

Although these products have been designed to last for as long as possible and they will stand up much better than fresh meat products, ham cannot last forever, and after about a week, it will start to deteriorate.

If you do decide to eat ham after the eight days have passed, it is a good idea to inspect it closely first. We’ll cover some signs that it is no longer safe to eat later.

Can You Freeze Honey Baked Ham?

Yes, you can freeze honey baked ham, and this is one of the best things to do with it if you aren’t going to use it all up quickly. It tends to be expensive, so you probably don’t want to waste any of it – in which case, portioning it up and freezing it is the best option.

If you want to freeze ham, it is best to do this within five days of purchasing it, to ensure that it is still fresh enough to be safely frozen and defrosted, without majorly impacting upon the product.

It’s a good idea to cut the honey baked ham into portions and then wrap these individually so that you can easily defrost only as much as you need. Pre-sliced honey baked ham is great for luxury sandwiches and snacks, and you can just wrap a few pieces in some aluminum foil to make this simple.

If you plan to use the whole ham in a single meal, it is easy enough to wrap and freeze the whole thing. It can then be placed in the fridge to defrost about 48 hours before you intend to eat it (depending on the size of the ham).

Don’t leave your ham to defrost at room temperature, as bacteria will start to spread in the outer flesh before the middle is even close to defrosting.

How Can You Tell if a Ham is Okay to Eat?

If you are in doubt about some honey baked ham, the safest option is to discard it without consuming it. However, if you want to check, there are a few signs to watch out for, such as sliminess or a funny smell.

When you get the ham out of the fridge, inspect it closely. Look for specks of mold on the surface of the ham, or any change in color. Next, smell the ham. If it smells sour or musty, throw it away; it is no longer safe to eat.

You can also check the texture. Ham should be firm, and not mushy or slimy. If the outside has developed a slippery film, it is not safe to eat anymore.

Do not taste ham you are unsure about. It is better to throw it away than to risk food poisoning. If you bite into ham that you find tastes bad, spit it out and throw the rest of the food away.

How Long Will Defrosted Ham Last For?

If you have taken ham out of the freezer, you may be wondering how long it is okay to keep it in the fridge for. This depends a bit on when you froze it, but in general, you should use it up within a couple of days.

For ham that was frozen promptly, you may be able to stretch this rule a bit. Given that ham’s overall shelf life is up to eight days, it might last four or five days if you put it in the freezer the day that you got it – but do be cautious and don’t eat any meat that you are unsure about.

Don’t refreeze ham that has been defrosted. You should only take what you are going to use out of the freezer, as other ham can’t be put back and frozen again. The risk of bacteria having formed on the ham’s surface is too great, and freezing won’t keep it safe at this stage.

Can You Leave Honey Baked Ham at Room Temperature?

No, you can’t. Although it may be tempting so that the ham is ready to eat whenever you fancy a slice, it will quickly go off when stored at room temperature. Anything more than two hours above 40 degrees F will make the meat inedible.

You can keep a honey baked ham in the fridge for just over a week, provided that you chill it promptly. Pay attention to the instructions from the manufacturer and use best before dates as a guide, as well as your own judgment. Don’t eat meat that you think looks, smells, or feels unsafe!