How Long Does Potato Soup Last in the Fridge?

Potatoes are one of the most versatile foods you will find in the kitchen. The recipes and dishes to which this staple food can be added would make a super lengthy list.

One way you can make use of potatoes is in soup. Potato soup is delicious, healthy, and filling. You will be tempted to cook more than you can consume, especially if you are trying it for the first time. This means you will have some soup leftover and be faced with the dilemma of preserving it for some extra days so that you can eat it later. 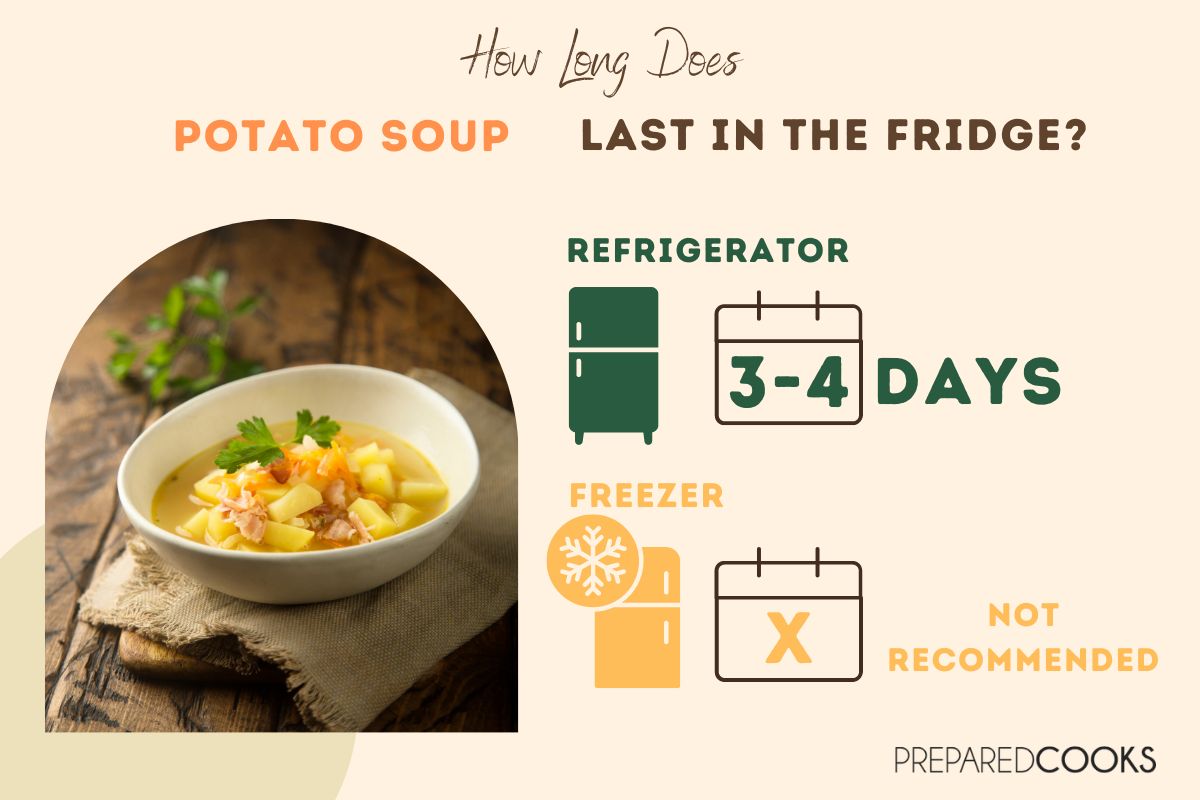 According to the USDA, any soup or stew should not stay longer than 3 to 4 days in the fridge. The USDA recommends this length of time in the fridge for the best quality.

Contents show
1 How Long Does Potato Soup Last at Room Temperature?
2 How to Tell if Potato Soup Has Gone Bad
2.1 Smell
2.2 Visual Appearance
2.3 Check the Containers
2.4 Taste
3 How Can You Store Potato Soup to Last Longer?
3.1 Mode of Storage
4 Should You Freeze Potato Soup?
5 Final Thoughts

How Long Does Potato Soup Last at Room Temperature?

A hot bowl of potato soup is the best dish on a cold day. If you’ve made more than you can finish in one go, how long can you let the pot of soup sit at room temperature before it becomes dangerous for consumption?

Bacteria love to multiply from 40°F to 140°F. If you let your pot of potato soup sit for longer than two hours, it might not be safe to eat anymore.

It is best to just plan to refrigerate your pot of potato soup as soon as it gets cool. It is not advisable to put a hot pot of soup in the refrigerator, and large batches of food do not cool down on time. A big bowl or pot of steaming soup in your fridge can raise the temperature inside, affecting other food items or damaging the fridge.

You can fast-track the cooling process with an ice bath or separate the food into portions and refrigerate accordingly. Once you notice you have more soup than you can finish, you should plan to refrigerate it immediately.

How to Tell if Potato Soup Has Gone Bad

Potato soup isn’t shy when it begins to go bad. It would give off several telltale signs telling you it’s no longer suitable for consumption.

Here are the changes you will notice as your potato soup begins to go bad. All you need to assess if potato soup has gone bad or not is your sense of touch, smell, and sight. You probably shouldn’t taste it, to be sure.

Your potato soup should always smell as good as it smelled the first day you made it. If you notice a change in aroma, you should take a closer look. However, if your pot of potato soup has an unpleasant aroma, it is a clear sign that it has gone bad.

An okay potato soup should look rosy and inviting. If your soup has lost its original color, it might be a sign that it has gone bad. If you check closely and see signs of mold, you should definitely throw it out. There might be a layer of fat covering your potato soup; it should never be cloudy.

If your potato soup came in cans or prepackaged, you should check the package for signs of swelling or bulging. If you notice any bulge or swelling, it means your potato soup has gone bad. The bulging or swelling can compromise the packaging, causing it to burst and inviting more bacteria to spoil the food even further.

If you have canned soup, you should always look at the expiry date before you take it off the shelf at the grocery store. The expiry date tells you when your soup stops being at its best quality. While a soup that has gone past its expiry date might still be good if left in the fridge, it might not taste as good as you’d expect. You should aim to eat canned soup before its expiry date.

Eating spoiled food can ruin your day. At times, your soup might smell reasonably okay and look alright, but its taste might be slightly off. If your soup tastes sour, you shouldn’t try to eat it. But if it still tastes good, you definitely shouldn’t throw it out.

How Can You Store Potato Soup to Last Longer?

It is best if the containers you plan to use are shallow and wide. This helps the food cool evenly. If you haven’t opened it, it’s okay if you want to keep your potato in the package from the store. If you have opened it, you should transfer it to a glass jar or plastic container.

Don’t place your soup in the door of the fridge. The temperature changes rapidly as the door is opened and closed, which ends up affecting the shelf life of your potato in the fridge.

Should You Freeze Potato Soup?

Freezing potato soup will, in theory, make it last longer, but you shouldn’t. Potatoes will become grainy and watery after they have been frozen and thawed. You can even refreeze; it wouldn’t fare well at all after it has been thawed. Storing in the fridge is the best bet for your potato soup.

Many people have asked if it’s okay to leave their potato soup out to cool overnight. Yes, you can. You can leave your soup to cool overnight, then reheat for 10 to 15 minutes the following day.

You might be thinking that it’s not ideal to let your soup sit for more than 2 hours without preserving it. But by letting your soup cool overnight, it remains safe to heat because bacteria may not have grown and reproduced to be dangerous within the timeframe.